Skip to content
The Backlog and How it Affected Me 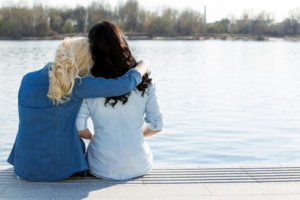 The Backlog and How it Affected Me

Written by: A Sexual Assault Survivor

There it was. The dreadful little secret I had been hiding for all those years. I had managed to cram all that baggage in a tiny little box and store it deep down to never hurt me again. With one quick phone call, that tiny little box was ripped open and the pain all came down on me like a ton of bricks.

I am a wife to an amazing man, a mother of two precious boys, a daughter of loving parents, a loyal friend, and I’d like to think, a good and honest contributor to society. I picked a career to help other people and I’d like to think I’m good at it. I encounter people on a daily basis who carry a great deal of pain and who are all actively trying to heal from a trauma that I secretly know very well.

I was a senior in college and about to graduate. I went to a football school in the South and was in a city I wasn’t familiar with for an out of town game. My “friends” had left me at a party and I was stranded at a stranger’s house. As luck would have it, my trusty cellphone died and I was left without a way back to my hotel room. Next thing I knew, everyone was gone. I was alone with a man who had been a complete stranger to me. After everyone had left, the man, who must have been twice my age, sexually assaulted me.

After he passed out and I thought it was safe to escape, I grabbed his cellphone and snuck out of the house. I was in such a hurry to leave that I left my shoes. I remember thinking that I could walk miles and miles without shoes if it meant I would never see him again. I used his phone to call a taxi and the driver picked me up at my closest cross street. I was crying hysterically and he asked if he should take me to the hospital. At that point, I just wanted to go back to the hotel where I was staying and sleep.

On the drive to the hotel, I used his phone again to call my parents. It was in the middle of the night so, of course, they didn’t answer. I left a message on their voicemail telling my dad that I needed him to come get me – he was three hours away. After I left the voicemail, I threw the cellphone out of the taxi window as if that would fix everything and rid me of the horror of the evening.

After a lot of thought, I decided not to prosecute and chose not to press charges. Whether or not it was the right or wrong choice, it was MY choice. A choice that I thought a lot about and contemplated for years. The sexual assault stripped me of my power and my choice. That was the one thing I could control… until the phone call.

I was on my way into work when I got the call, completely out of the blue. The caller was from the State Attorney’s office. She let me know that, 11 years and 11 days later, my rape kit was going to be tested. She informed me that it would be tested before the holidays and that I would receive a follow up phone call with “my options.”

A law was passed in 2015 and funding was given to test the 13,000 backlogged rape kits, whether or not the victim wants it tested. What breaks my heart most is knowing that there are 12,999 other people just like me getting that dreadful call, all ordinary people just living their lives, completely blindsided by their past. When I think about the enormous amount of pain and suffering that will be caused, it simply breaks my heart.

I share my story for two reasons. First, we need to evaluate the method in which these individuals are being contacted. The call should be made from a Certified Rape Crisis Center and a Victim Advocate who is trained in trauma-informed care. Someone who can provide immediate emotional support and provide real options and services to a victim. Secondly, we need to evaluate the appropriateness of testing these kits. If the statute of limitations has passed, in my case by 3 years and 11 days, and the victim has chosen not to press charges, the evidence and their kit should be left alone in compliance with the victim’s choice.

However, given the new law, it is my hope that some good will come from the backlog testing, even though it won’t for me. Remember to be kind. There are 13,000 victims in Florida fighting a battle you know nothing about.